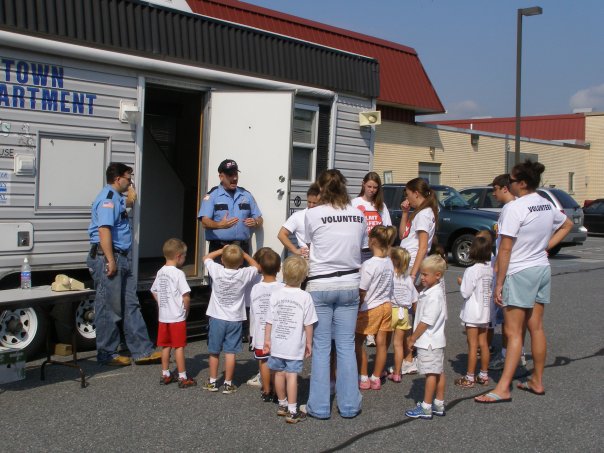 In collaboration with the City of Allentown Fire Department, Burn Prevention Network funded a Fire Safety House for fire safety training. From the outside, the Fire Safety House appears to be a standard trailer, but when you head inside, visitors see a fake kitchen, bedroom, and living space set up to mimic the effects of a real home. The trailer was used as a resource to teach school children about the importance of fire safety and prepare them for a real fire.

As students made their way throughout the Fire Safety House, they experienced scenarios meant to emulate what could happen during an actual fire situation or daily life. For example, when the students walked through the kitchen, they were taught not to contact hot surfaces such as the oven or stovetop to prevent burns. As students headed to the bedroom, they were advised on what to do if a fire broke out in a living area. They learned tips such as checking the temperature of a door handle to know if there’s a fire on the other side, pushing clothes, towels, sheets, or other fabric materials under the door to prevent smoke from entering and escaping to a window or through the nearest exit to a safe location before waiting for help to arrive. To help the students put the information they were told into play, the staff used fog machines to create fake smoke and put warmers on the doors inside the trailer to emulate the effects of a real fire before instructing them to use what they learned to escape the trailer safely.

Fire Safety House training proved effective during a fire incident in Northside Allentown. Two siblings escaped a fire inside their home to their back porch. When the children were rescued from their back porch, they told the firefighters at the scene that when they heard the fire alarms in their house go off, they checked the temperature of their bedroom door and, after feeling it was hot, pressed clothing under the door, preventing smoke from entering the room before they exited through a window out to their back porch.

Lee Laubach Jr, a Burn Prevention Network Board Member, was Fire Chief for the City of Allentown Fire Department at the time. He praised the Fire Safety House program and its effectiveness in helping young children learn the importance of fire safety, saying, “We hope they take these skills and never have to use them. For us, the best fire we have is the one that never happens, but hopefully, they have these skills in case an accidental fire happens.”