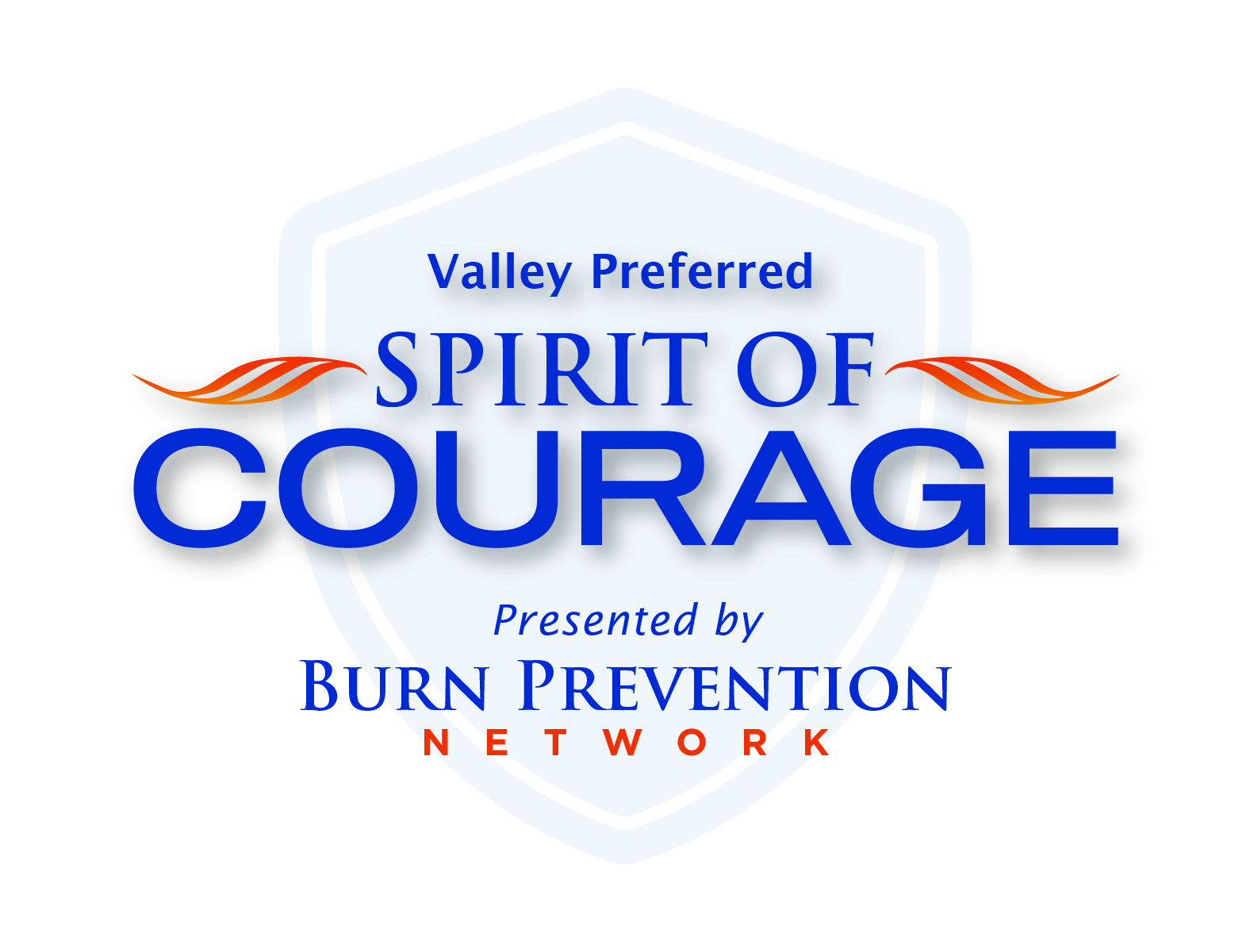 Join us at this year’s Valley Preferred Spirit of Courage event! Buy your tickets today!

The Valley Preferred Spirit of Courage event is presented by Burn Prevention Network and was created by Burn Prevention Network, Lehigh Valley Health Network and Valley Preferred to honor local heroes who have risked their lives to save others from burn injury or death. Over 15 years later, this innovative event continues to honor heroes and also honors burn survivors who have gone on to help others in the burn community.

As one of the top events in Eastern PA, it attracts nearly 1,000 firefighters, EMTs, police officers, and business people from the Lehigh Valley and across the state of Pennsylvania. 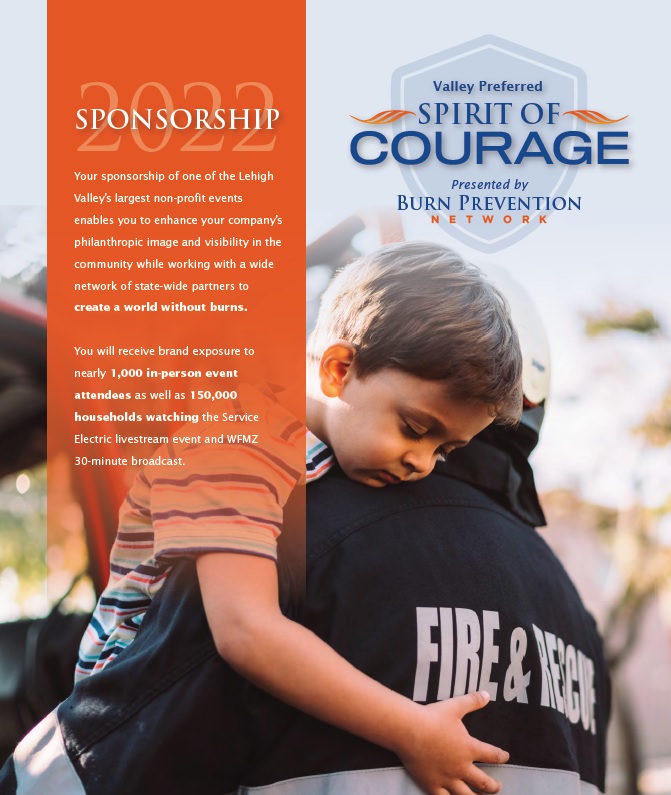 The Partners in Prevention Award will be presented to B. Daniel Dillard, Bethlehem PA

The Spirit of Courage Award will be presented to the following honorees:

Award is sponsored by MedEvac-LVHN, Department of Public Safety.

In 2003, Wendy Davis sustained a burn injury over 25 percent of her body while camping with her family. Several years later, a dear friend sustained a serious burn injury and was in critical condition in Lehigh Valley Health Network Regional Burn Center. Davis stayed by her friend’s bedside to provide comfort for him and his wife, and eventually began attending burn survivor support group meetings with him and his family. Davis began volunteering for other support activities, including the dodgeball tournament and Camp Susquehanna, a summer camp for young burn survivors. She took on the role of counselor for girls ages 8 to 12, despite her fear of being around a campfire. One evening when one of her campers also expressed fear of the campfire while everyone was roasting marshmallows for s’mores, Davis suggested they try it together. Within minutes, they were standing side-by-side, close to the fire, roasting marshmallows. Later that year, she volunteered to be a counselor for the Mid-Atlantic Burn Camp. Davis also has volunteered to teach local massage therapists about the intricacies of massaging scarred skin, and how touch and massage can impact a survivor. Davis brings an “all-in” attitude to everything she does to provide comfort and support to those in need.

On a September evening, Andy Carr and Katie Gaboury were traveling on Route 248 in Palmer Township when they came upon a car on its side with smoke and flames pouring from the engine compartment and people screaming. Carr, a volunteer firefighter, immediately stopped and ran toward the burning car, where two people were trapped. Although he had no protective gear, he climbed into the car through the back. Matt Fredericks, another firefighter passing by, also stopped to help, along with another man. They were able to quickly free the female passenger. They returned to the burning car with worsening flames and smoke, where the driver was tangled in the seatbelt. They cut the seatbelt, pulled him through the back and carried him away from the car. Within seconds, the car burst into a ball of flames. The two passengers survived thanks to their efforts.

Ricardo Montijo, an employee of Dunmore Appliance, was delivering a stove to a customer when his partner saw a house on fire across the street. He immediately ran to the house, where he learned there was someone trapped inside. With the front of the house on fire, Montijo ran around to the side and found an exterior stairway to the second floor. He climbed the stairs and entered the apartment to find an elderly woman and her dog. The woman was disoriented, and the apartment was filling with smoke. He helped the woman and her dog down the stairs and down the street to safety, then returned to the burning house. At that point the entire house was engulfed in flames. A man on the first floor died in the fire.

On the evening of March 6, Upper Saucon ambulance and fire departments were dispatched for an automobile fire on Lanark Road. When they arrived on scene they discovered a car smashed into a tree, with the tree and car engulfed in fire and reports of people inside. Michael Fritts, Matt Markle, Todd Nelson and Kala Schantz attempted to put out the fire with fire extinguishers, but the flames persisted. They heard a call for help and realized it was coming from the back of the car. As they shattered the window, a hand emerged. With the intense fire continuing to spread, Markle and Nelson pulled the victim from the burning car. He was in critical condition, and the other three people were killed in the fiery crash. All four were current or former students at DeSales University; the three young men had been members of the university’s baseball team.

A call for a fire at a laundromat in Reading came in around 10 p.m. on July 1. When firefighters arrived, they encountered smoke and flames in the first floor laundromat and reports that adults and children were trapped in the second- and third-floor apartments above. Jesiah Newsome began a search of the second floor in heavy smoke and very limited visibility. He came upon a 60-year-old man in the hallway of one of the apartments who was semiconscious. He was quickly joined by Ronald Frey, who had been searching for another apartment on the second floor. They carried the man down the stairs and out of the building to waiting EMS. They then returned to the search amid heavy smoke and flames now on the second floor, without the protection of a charged hose line. Fortunately, everyone else had safely left the building, and the man they saved survived. The fire was possibly started by fireworks.

It was a windy day in early March when a man discovered a small fire on his back porch. He attempted to put the fire out with a garden hose but had to return to the house to turn on the water. By the time he got back outside, the fire had spread to the kitchen and was rolling toward the second floor. When police and firefighters arrived, they found heavy smoke throughout, and two small children still inside. Matthew Bonawits, first on scene, entered the home and located a 15-month-old child on the first floor. As he got the child outside, he learned there was a 3-year-old child in a second-floor bedroom, but the conditions had deteriorated significantly. Floyd Young arrived with a ladder. Young broke the window, entered the second-floor bedroom, found the child and handed him to Bonawits on the ladder. The man and his two small children all survived, in part because he could direct first responders to the child’s window. With smoke quickly filling the bedroom and high heat and fire in the hallway, the closed bedroom door gave the child the few precious minutes it took for first responders to reach him.

Around 9 a.m. on an April morning, a Reading man called 911 when he smelled smoke coming from his neighbor’s rowhome. When he saw the owner’s car, he realized she was inside the home. He kicked in the door and tried to enter the home, but the smoke was too thick. When firefighters arrived, they were met with heavy smoke and flames from a fire in the basement. Firefighters Thomas English, Andrew Getka, Dev Kannan, Corbin Keiser and Kenneth Licwinko entered the home to search for occupants, in zero visibility. They were able to locate the stairs and began searching the second floor. When Keiser entered a bedroom, he was able to make out the corner of the bed and discovered an unconscious woman in the bed gasping for breath. He was joined by the other firefighters, who had to carefully maneuver within the tight space of the rowhome to bring her out. They knew speed was paramount when her gasping stopped. They were able to safely carry her out to waiting EMS. She survived, thanks to their efforts.

When firefighters arrived at the scene of a house fire in Upper Macungie on May 4, they found heavy fire coming from the second floor. The rear door was partially blocked, but Matt Sadrovitz forced it open enough to gain entry. He was hit with heavy smoke and many obstructions. After clearing a path for the fire team, he proceeded up the stairs to search for victims, amid heavy fire and smoke. He found a man sitting on the stairs, with fire rolling around him. Sadrovitz placed himself between the fire and the victim and began dragging him down the steps, which was made more difficult because of his size and the narrow hallway. He eventually got him outside to waiting EMS. Sadly, despite the heroic efforts of Sadrovitz and the other firefighters, the victim passed away.

On Dec. 5, at about 9 p.m., the Easton Fire Department was dispatched for an automatic fire alarm at the Apartments by the Park. The apartment complex had a history of false alarms. When units arrived, they saw no obvious sign of smoke or fire. While checking to find the location of the alarm, smoke started showing, and they were advised of a fire in one of the apartments. Doug Cochran ran into the apartment to search for victims and found an unconscious woman overcome by smoke. He carried her out to waiting EMS, and she was taken to Lehigh Valley Health Network Regional Burn Center. She fully recovered from her injuries.